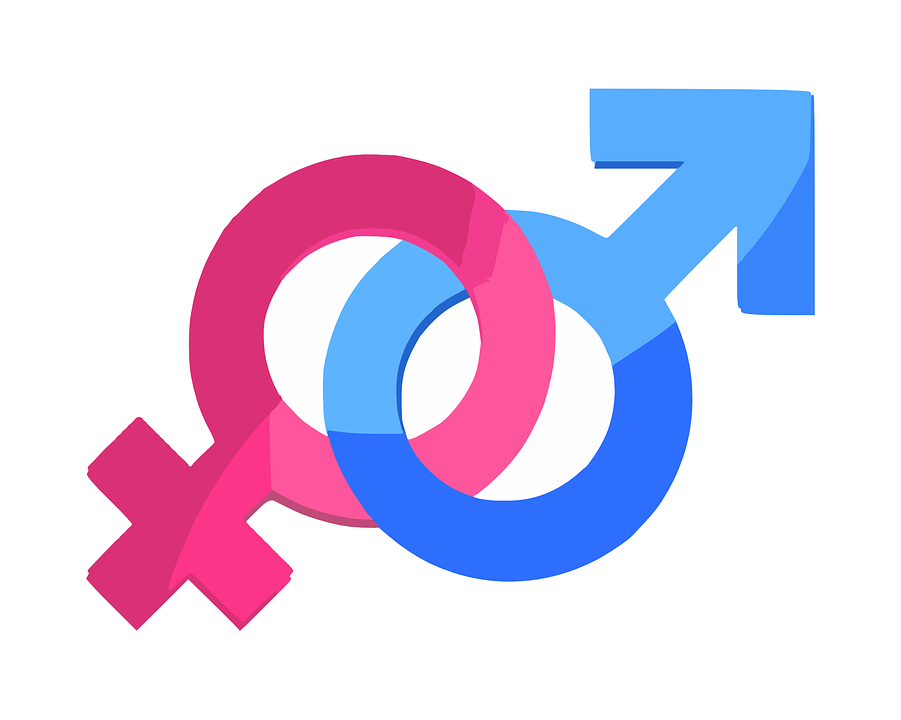 For centuries, humans have tended to assign different roles in society, codes of behavior, and specific feelings and thoughts to men and women.  Gender is defined in several ways. In the Oxford English Dictionary, gender is defined as “a class of things or beings distinguished by having certain characteristics in common; (as a mass noun) these regarded collectively; kind, sort.” According to the ADL’s Glossary of Education terms, gender is “the socially-defined ‘rules’ and roles for men and women in society. The attitudes, customs, and values associated with gender are socially constructed; however, individuals develop their gender identities in two primary ways: through an innate sense of their own identity and through their life experiences and interactions with others. Dominant western society generally defines gender as a binary system—men and women—but many cultures define gender as more fluid and existing along a continuum.” In a definition from Dictionary.com, gender is also described as “a similar category of human beings that is outside the male/female binary classification and is based on the individual’s personal awareness or identity.” As time has continued, gender has extended past just a male and female binary. According to Etymonline.com, the word gender has referred to the social and biological qualities of males and females since the fifteenth century.  In 1963, a sense of genders social attributes as much as biological qualities came with feminist writing. We now recognize gender as a social construct that includes more than fifty genders besides male and female.

Reading Hansberry’s A Raisin in the Sun can help individuals realize that gender inequality is a real and happening thing. Though the play takes place dating back to World War Ⅱ and follows through to the present day, women are still judged for wanting masculine jobs. Thinking about gender equality when reading this text can open the reader’s mind. They may be able to connect it to a real-life situation that they, the reader, have experienced in their own personal life.

The Woman Warrior: Memoirs of a Girlhood Among Ghosts by Maxine Hong Kingston, invites readers into the life of one Asian-American writer. In this autobiography, Kingston uses the stories of unique women to provide readers with an understanding of the effects of gender and how it victimizes them by taking their voice. No-Name Woman, Kingston’s long-forgotten aunt, becomes a target for violence when the village turns on her for committing adultery. Moon Orchid, Kingston’s living aunt, tries to resume her marriage with her husband only to be rejected. Each of these stories is a representation of the gender-driven hardships that women experienced due to the hardships of the Chinese culture.

For these women whose stories are presented through this memoir, we can see how within the Chinese tradition there are gender rules that limit their self-expression and their value. In the first chapter “No Name Woman”, also the name of her aunt, Kingston gives the reader the first story of a woman who is violated by the male-dominated Chinese culture and as an effect, commits suicide. Brave Orchid, who is Kingston’s mother, tells Kingston this story in an effort to maintain the family’s women’s history in which the men have the power to eliminate women from their families. She says, “You must not tell anyone … what I am about to tell you. In China, your father had a sister who killed herself. She jumped into the family well. We say that your father has all brothers because it is as if she had never been born” (1). When Kingston’s aunt’s husband and other male family members went to America, the aunt had been watched by the villagers eliminating her private life. Though watched very heavily, she was raped and given orders by both her husband and her rapist. They told her, “if you tell your family, I’ll beat you, I’ll kill you” (7). No Name Woman was to be there the following week, and she did exactly what he said. If she didn’t then she wouldn’t receive oil or wood from her rapist. Being silent became her best option because if she wasn’t, she wouldn’t have the resources to live a standard life in China. She told the man who raped her that she was pregnant and he organized the villagers to raid her home. In the memoir, Kingston talks about the commensal tradition. In which, “ food is precious, the powerful older people made wrongdoers eat alone” (7). Chinese, unlike the Japanese, “hung on to the offenders and fed them leftovers” (7).  They destroyed her home, her livestock, and dismantled her room. She ends up killing herself and the baby in the pigsty, in Kingston’s mindset to protect the child and the father. Kingston believes the villagers wrongfully convicted her aunt of adultery; the author suggests because the two men gave orders, she followed. In addition, Kingston adds, “she had almost forgotten what he looked like”, a result of sharing a diminutive amount of time with her husband before he departs for America (7). Her mother’s main purpose of this story isn’t just to inform her not to tell anyone about her aunt, but to warn her that “now that you have started to menstruate, what happened to her could happen to you” (5). As Kingston and her family are moving to America, she is told to not follow the steps of her aunt, but to be obedient to her father or she will have the same outcome as her aunt.

Another woman in The Woman Warrior, who has been affected by the limitation of their self-expression to male authority based on Chinese traditions is Moon Orchid. In the chapter “At Western Palace”, Kingston provides us with the story of how Moon Orchid is called by her older sister and Kingston’s mom, Brave Orchid, to come to America to reclaim her remarried husband.

After being stressed by Brave Orchid to go get her husband back after arriving in the States, her and Brave Orchid decide to go visit Moon Orchid’s husband. Instead of offering his wife a warm welcome into this new country, he asks her “what was she doing there” (152). She was speechless, just opening and shutting her mouth. She covered her face and remained silent, but Brave Orchid didn’t. She tells Moon Orchid’s displeasing husband that she wrote her every day and finally convinced her to come to America. This conversation with the Americanized husband demonstrates how incredibly voiceless a Chinese woman is by living in a traditional male dominating society. In a very low whisper, Moon Orchid said, “what about me”; he responded, “I have a new wife” (153). Later in the scene, Moon Orchid’s husband explains to her, “I have important American guests who come inside my house to eat. . . . You can’t talk to them. You can barely talk to me.” (153). Despite Moon Orchid’s continual talking in front of Brave Orchid’s children when she first visits, now she is completely mute while under the control of her husband. In all this madness, even after surviving her husband’s emotional abuse, Moon Orchid is unable to talk. Her husband has so much control over the life of Moon Orchid, that he even gives her instructions on what to do on her visit to America. He says,” I do not want her in my house. She has to live with you or with her daughter, and I don’t want either of you coming here anymore” (154). Moon Orchid did not say anything. For years she had been receiving money from him while he was in America. She never told him that she wanted to come to the United States. She waited for him to suggest it, but he never did  (124). This passage describing Moon Orchid’s passive actions are very similar to that of No Name Woman. Moon Orchid, a woman who desires to come to America, yet, in fear, refuses to speak up for what she desires. Her husband sending money home to China is his justification for his absence from the household. In contrast to No Name Woman’s story, this involves a man, who leaves his wife in China and finds a new wife in America. The difference between the two stories occurs when we find the villagers do not fault him for his unsuitable actions and his actions never bring disgrace upon his family living back in China.

Gender plays an important role within A Raisin in the Sun, by Lorraine Hansberry. The book depicts a black family living in Chicago during the 1950s. Their struggles are shown throughout the duration of the book as the family members battle through adversity and discrimination that was prevalent during that time period. Gender discrimination according to the Oxford English dictionary, is discrimination on grounds of sex or gender; sexual discrimination. The major character that faces gender discrimination throughout the book is Beneatha. Her goal to become a doctor is looked down upon by her family members, including her brother Walter. Walter explained to her that men normally hold the jobs of doctors, “ain’t many girls who decide to be a doctor” (Hansberry, 36). Due to her gender, Beneatha is immediately doubted.

Beneatha also faces gender discrimination when dealing with her boy interest George Murchison. When Beneatha decided to change her hairstyle, George didn’t even want to take her out on a date anymore, “what have you done to your head—I mean your hair!” (Hansberry, 80). Ruth also didn’t approve of Beneatha’s decision, going as far to say George didn’t have to take her out anymore if he didn’t want to: “Now that’s the truth—it’s what ain’t been done to it! You expect this boy to go out with you with your head all nappy like that?” (Hansberry, 80). Beneatha stays true to herself and responds to George by saying, “That’s up to you George. If he’s ashamed of his heritage— (Hansberry, 80). George and Ruth had a preconceived belief that women were supposed to look a certain way due to their gender and once Beneatha had a hairstyle that that wasn’t “normal”, people became upset and judgemental. Even after all of these instances in which Beneatha’s life is questioned solely based on her gender, she does not stray away from what she believes in and is passionate about.

In addition to Beneatha, Walter also battles inner demons related to his gender. Since Walter is the man of the house, he feels obligated to be the main provider for his family. However, while working at his current job as a limousine driver, he doesn’t feel like he is successful enough: “I drive a man around in his limousine and say, ‘Yes, sir; no, sir; very good, sir; shall I take the Drive, sir?’ Mama, that ain’t no kind of job… that ain’t nothing at all” (Hansberry, 73). Walter aspires to be the men that he currently works for. He doesn’t feel like he is fulfilling his masculine duty as a man of the house, and acts throughout the book to try and correct that. Walter faced an internal struggle based on the fact that he was as far along on the social ladder as he should be as a supporting father and husband. Walter felt pressured by the standards of modern day society to be successfully supporting his family as a male so that he wasn’t on the receiving end of gender discrimination from others in society. Beneatha faces gender discrimination externally by being looked down upon by her entire family and society.

Literature is one of our main resources to learn about and explore the ideas of gender. It is where we have mostly learned and spread the roles of gender and what society expects of each sex.

Kingston, Maxine Hong. The Woman Warrior: Memoirs of a Girlhood Among Ghosts. Knopf, 1976.